Can you believe it’s October 1st already?! When I bring out the fall decor, I also incorporate some Halloween decorations into the whole scene. Then, of course, we add more decorations as the season progresses. Here is the very beginning, and as you can see, we’ve gone batty!!

There is no mantle here, but the Hubs will, must has promised to build one. In the meantime, I’ve learned to decorate around the fireplace. The kids actually made the bats, and I’ve collected the scarecrows over the years. I love scarecrows, and I love showcasing my children’s artwork. Talk about thrifty!

My oldest child drew a bat on black construction paper and then cut it out. My youngest little person added the face. The big bat was a school project that was made from paper plates, googly eyes, foam shapes and was held together by two brads. Thrifty, Thrifty, Thrifty!!! 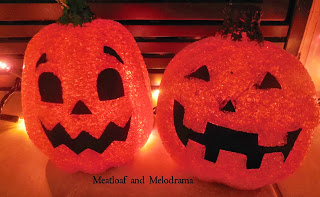 I love the glow from the Halloween lights. It didn’t turn out well in the pictures, so I just added a close-up of two pumpkins. They were originally battery operated, but now, I just let them get some illumination from the lights behind them.

Someday, I’ll figure out a way to link to some blog parties! Until then, thanks for reading, and have a great day!! 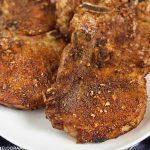