Hi friends! So the other day, I decided that our family is in a dinner rut. Big time. We pretty much go from chicken to beef to pork, and just for fun, we sometimes reverse that order. Okay, so maybe it's not that bad, but you get the idea.

Anyway, I knew we had to shake things up around our home and try something different, so I went out and bought some Cornish hens. And then, instead of baking them, I made these Grilled Orange Glazed Cornish Hens, and let me tell you, they were awesome! 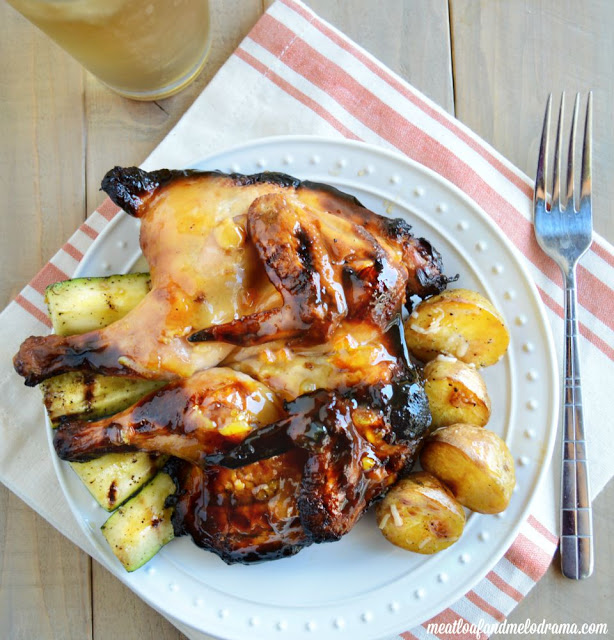 The last time I made Cornish hens was right after Hubby and I were married. Yep, it's really been that long. We decided to host a little dinner party for our parents, and we wanted to make something extra special. I don't remember how the hens turned out, but the Hubs later told me his baked potato was as hard as a rock. Sigh. I didn't have much cooking experience back then, but thankfully, the parents never said a word.

So when I found these Tyson® Cornish Hens at Walmart, I knew that they would be perfect for making a regular weeknight dinner a little extra special. The hens have no additives, preservatives or hormones, and they come in two-packs. And, the giblets have been removed, which was a little extra plus for me!

I found the hens frozen in the middle of the  Meat and Poultry section.

If you're grilling poultry, you need a good marinade to keep the meat nice and juicy, so I also grabbed a few bottles of Kikkoman® Orange Sauce to use both as a marinade and as a glaze.

I only needed a few other ingredients to get these hens ready for dinner. I also purchased some fresh zucchini, which tastes incredible when grilled, and some small potatoes. Since I didn't want to serve Hubby another potato rock, I decided to cut them and roast them this time around!

I know that a lot of people think grilling season is coming to a close, but here in the desert, we're just getting started! Oh, we still use the grill in the summer, but when the cooler temps hit, it's so much more enjoyable!

I let the birds soak in an olive oil-citrus marinade all afternoon. Then, Hubs and I butterflied them by cutting the backbones so that they would grill faster.

My family loves orange chicken, so I wanted to create a glaze for the hens that featured the same flavor we love from our favorite Chinese restaurant. I whisked together some of the Kikkoman Orange Sauce, a generous helping of orange marmalade and a little bit of Dijon mustard, just for an extra boost of flavor.

We put the hens on the grill, skin sides up. I like some charred areas, but not on the entire bird, so I kept the middle burner off and rotated the hens so that they would cook evenly. 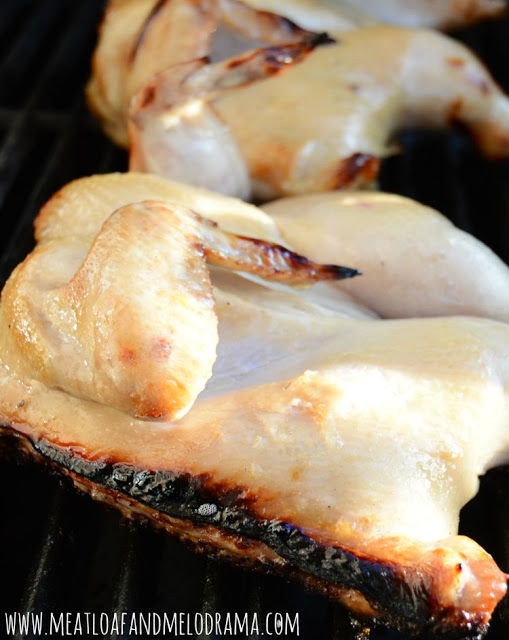 When they started to brown, I began basting the hens with the orange glaze. 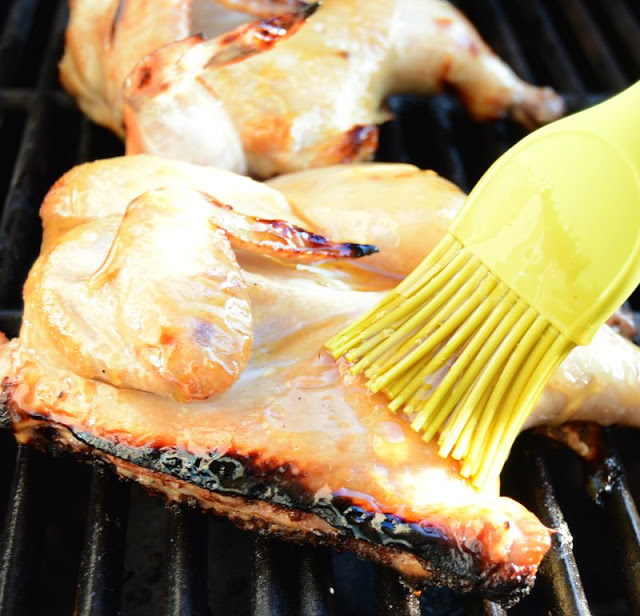 The nice thing about grilling the hens is that they were done in about 20 minutes. How's that for a quick meal?!

I served them with roasted potatoes and grilled zucchini. The Hubs got an entire bird to himself, which made him feel special, and the kids and I each had about a half of a bird.

The skin was crispy, the meat was tender and juicy, and the tangy orange glaze was just the icing on the cake.

Allow hens to thaw, and place hens into plastic freezer bags -- I used 2 hens per bag.
Add ¼ cup of olive oil, juice from 1 lime, ¼ cup orange sauce and ¼ cup orange juice to each bag, and marinate in refrigerator for at least 4 hours.
To make the glaze, add about ½ a bottle of Orange sauce, 3 tablespoons orange marmalade and 1 tablespoon Dijon mustard to a medium sized bowl and whisk together. Set aside.
Remove hens from bags, pat dry, and cut hens in half along the breast bone.
Sprinkle each hen with generous amounts of salt and pepper, and place skin-side up on a warm grill.
We turned the middle burner on the gas grill off and placed the hens in the middle of the grill. Then we basted the hens with the sauce and rotated them to ensure even grilling.
Grill for about 15 to 18 minutes or until juices run clear and internal temperature reaches 180 degrees.
Remove from heat and allow to stand for about 5 minutes before serving to allow juices to settle.
Brush with additional Orange sauce before serving, and enjoy! 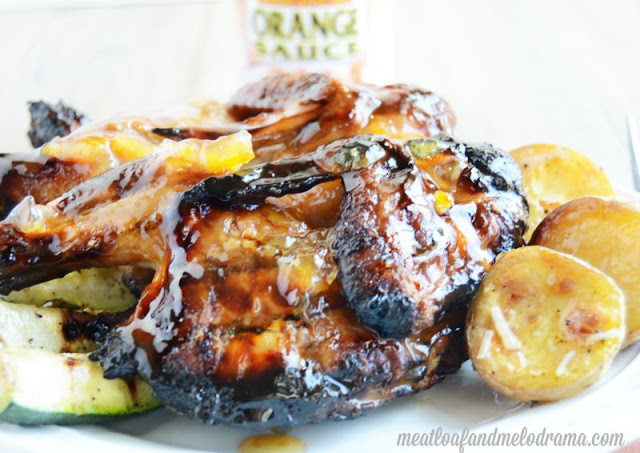 Have you ever grilled a Cornish hen? How did it turn out? If you need additional inspiration, you can check out even more recipe ideas from Tyson.
Thanks so much for visiting!