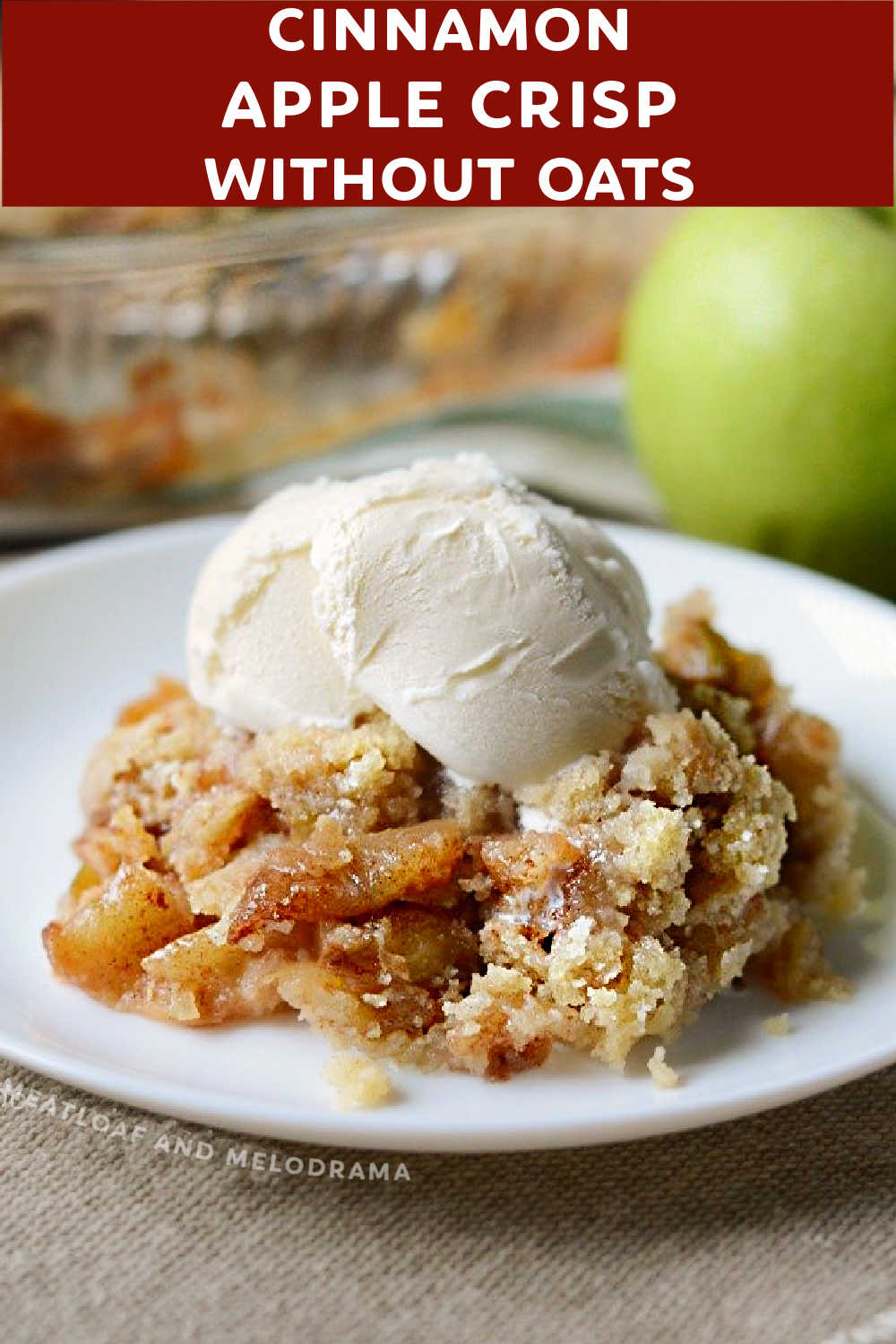 Cinnamon Apple Crisp Without Oats is one of the best desserts for fall. This easy fruit crisp recipe is simple and delicious. Made with Granny Smith apples, brown sugar and plenty of cinnamon, it's even better with a scoop of vanilla ice cream and caramel sauce!

One of the best things about fall is that it's apple season. Everyone in my family loves apples in just about any form, but we especially enjoy eating them when they've been baked to perfection in a sweet and juicy apple crisp.

It's funny but I had never even heard of this simple fall dessert until I got married. Growing up, my favorite apple recipes were apple pies and caramel apples, and lots of applesauce. But the Hubs' mom always made classic apple crisp after the family trip to the apple orchards.

So, a lot of apple crisps are made with oats. Actually, it seems like almost everyone else uses oats in their apple crisp recipes. The Pioneer Woman's apple crisp is one of the few recipes for apple crisp without oats that I have seen.

This easy apple crisp recipe is made without oats, and it's incredibly simple to make -- easier than apple pie!

Anyway, like I said, this easy dessert is basically Grandma's recipe for old fashioned apple crisp, except that I  like to add a bit more cinnamon when I make it. That's why I call this tasty version Cinnamon Apple Crisp.

Best Apples to Use

I always use Granny Smith apples when baking or making sweet apple desserts. You get a nice balance of tart and sweet.

Plus, these tart apples are firm enough to hold up well when baked. If you want a slightly different taste, try honey crisp, golden delicious, gala or pink lady apples.

Not only is this delicious recipe easy to prepare, but it's also made with simple ingredients. Most of these are pantry staples!

How to Make Apple Crisp without Oats

First, you wash, peel, core and cut the apples into thin slices. I'm not the best apple peeler in the world, but it's fine if there are some peels left on.

Next, place the sliced apples into a prepared baking dish. A 9 x 13-inch pan is perfect! Then, pour the lemon juice over the apples, so they don't brown.

Mix the sugars and cinnamon together, and sprinkle them over the apples. You can do this in the baking dish! Then, dot with butter.

To make the crisp topping, mix the flour, sugar and cinnamon in a medium bowl. next, cut the butter into the flour mixture with a knife, fork, pastry cutter or pastry blender.

I use room temperature butter for best results in fruit crisp toppings -- not super cold butter or melted butter. It's easier to mix but still makes a crumbly topping.

Next, lightly pat the topping over the cinnamon apple filling. Pop the apple crisp into the oven, bake it until the top is golden brown, and you're done! Super easy.

Topping the warm apple crisp, or any fruit crisps, with a healthy scoop of vanilla ice cream really takes this simple dessert to the next level.

If you serve this apple dessert while it's still warm, the scoop of ice cream melts into the crumbly topping and baked cinnamon apples, and makes it cool and creamy.

The brown sugar in the apple filling gives this delicious fall dessert a hint of caramel flavor -- yum! You can also top the crisp with caramel syrup or maple syrup for one of the most comforting desserts ever!

My recipe for apple crisp uses a little more cinnamon than most -- it's a personal preference. Reduce the cinnamon to 1 teaspoon and leave it out of the crunchy topping if you like.

Use your favorite apple variety if you're not a fan of tart apples. Or use a combination of Granny Smith and sweeter apples.

Store leftover apple crisp in an airtight container or cover the baking dish with aluminum foil or a lid. You can keep it in the refrigerator or at room temperature if it's cool enough in your house.

We had this tasty cinnamon apple crisp for dessert last night, and today, there is just a tiny corner piece left.

It's definitely a family favorite dessert around here! We think it's the best apple crisp recipe ever! 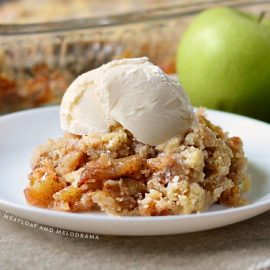 Published by Dee
Cinnamon Apple Crisp without Oats is one of the best apple desserts for fall. This easy apple crisp recipe is made with Granny Smith apples, brown sugar and plenty of cinnamon, and it's even better when topped with a scoop of vanilla ice cream and caramel sauce!
5 from 20 votes
Print Recipe Share by Text Share by Email
Prevent your screen from going dark
Prep Time 15 mins
Cook Time 50 mins
Total Time 1 hr 5 mins
Course Dessert
Cuisine American
Servings 6 to 8 servings
Calories 482 kcal

You can use 7 large apples or about 10 small ones. There should be enough apples to cover the bottom of the baking dish.  Use room temperature butter, not super cold and not melted for best results.

I hope you enjoy this easy apple crisp recipe without oats as much as we do. For more easy recipes and plenty of easy dessert recipes, be sure to sign up for our weekly newsletter!