Today, I want to share another one of my favorite ways to enjoy pumpkin. We have been having pumpkin bread, muffins, pancakes and cookies for a few years now, but last year, we discovered pumpkin pasta, and we are IN LOVE!

This is really a version of Alfredo sauce, but to me, it doesn't taste like Alfredo at all. I don't even like cream sauces, and I usually serve pasta with sauteed veggies and olive oil. Anyway, this is one sauce I do like--in moderation--and it's also a clever way to disguise veggies, if necessary.

First, I cook some Italian sausage--this can be pork or chicken. I like the added flavor from the sausage, but I've also used plain chicken. Of course, this can also be meatless! I add onions, garlic and some red pepper flakes, to give it a kick, and after the sausage is mostly cooked, I cut it up, drain the extra fat and add diced zucchini and olive oil. 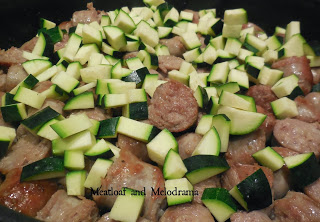 Then, I add some salt and pepper. As the zucchini cooks down, it looks like this: 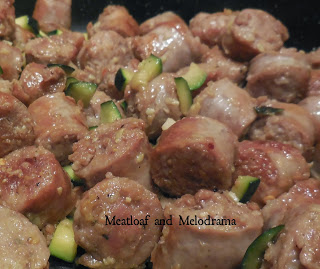 At this point, I add one can of pumpkin, a bit of heavy cream or half and half and one jar of good-quality Alfredo sauce. I also add a pinch of nutmeg and a tiny bit of cinnamon--gotta have cinnamon with pumpkin! Then, we get this: 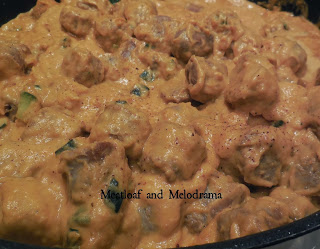 The pumpkin makes the sauce very thick, so I usually add more cream and some water from the cooked pasta. This time, I used penne, but we also like rigatoni or any other thick pasta shapes. Here is the final result: 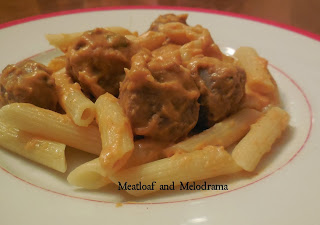 Because this dish is so rich, I like to keep the serving sizes small, and it's very filling. Even with a large family, we can easily make this last for two meals. Also, it's not swimming in sauce, which I like. 🙂 The sauce hides in the penne pasta, and you taste a burst of pumpkin with every bite--amazing. Serve it topped with Parmesan cheese and a side of salad, and you're good to go!

I cook for a crowd, but this can easily be halved.

Thanks for visiting today!