This No Churn Pumpkin Ice Cream is smooth, creamy and filled with a delicious pumpkin spice flavor. It's a wonderful dessert for fall!

So, we finally get some honest-to-goodness cool fall weather, and I decide to post a recipe for homemade ice cream. How weird is that?! I know But honestly, this isn't just any old ice cream -- as if there were such a thing! It's fall, after all, and with Halloween and Thanksgiving coming up, I thought it would be the perfect time for some creamy, dreamy No-Churn Pumpkin Ice Cream.

Now, I love baking and making comforting casseroles, soups and stews in the fall and winter, but anytime's a good time for ice cream. And, the kids and I have been having such fun with all-things pumpkin lately, so I thought, why not?!

Anyway, although we desert dwellers like to say it's cool out now, our idea of cool weather is probably just a tad higher than most people's.

We just took the same basic recipe for no-churn ice cream that we've used before and added pumpkin puree and plenty of pumpkin pie spice and some extra cinnamon. Easy peasy.

The longest and probably hardest part of the entire process is waiting for the ice cream to freeze, and once that happens, you're free to indulge!

How to Make No Churn Pumpkin Ice Cream 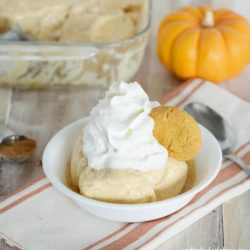 Calories: 391kcalCarbohydrates: 33gProtein: 5gFat: 26gSaturated Fat: 16gCholesterol: 99mgSodium: 92mgPotassium: 312mgFiber: 1gSugar: 30gVitamin A: 5785IUVitamin C: 3.3mgCalcium: 205mgIron: 0.8mg
Keyword pumpkin ice cream
Tried this recipe? Please comment and rate it! Show me your dish on Instagram!Mention @meatloafandmelodrama or tag #meatloafandmelodrama!
We barely waited for the ice cream to freeze before we just had to dig in, so it was still a little on the creamy side, but who cares?!
I won't name names, and I don't mean to brag, but we tried some pumpkin ice cream from an ice cream shop the other night, and our homemade version was waaaay better -- no artificial colors or anything either.
Plus, you totally control the spices. I happen to like a fair amount of pumpkin spice and y'all probably know by now how much I adore cinnamon, so we just experimented with the spices until we liked the taste.
But if you're not a pumpkin spice fan, just go easy on that one.
I served this easy no churn pumpkin ice cream along with a generous topping of whipped cream and these little pumpkin cookies we got at Sprout's, and let me tell you, this is the perfect combo.
I might even make some little pumpkin ice cream sandwiches next!
Pin
Share
Tweet
Pin
Share
Tweet
« Easy Pumpkin Alfredo
Easy Candy Coated Halloween Pretzels »