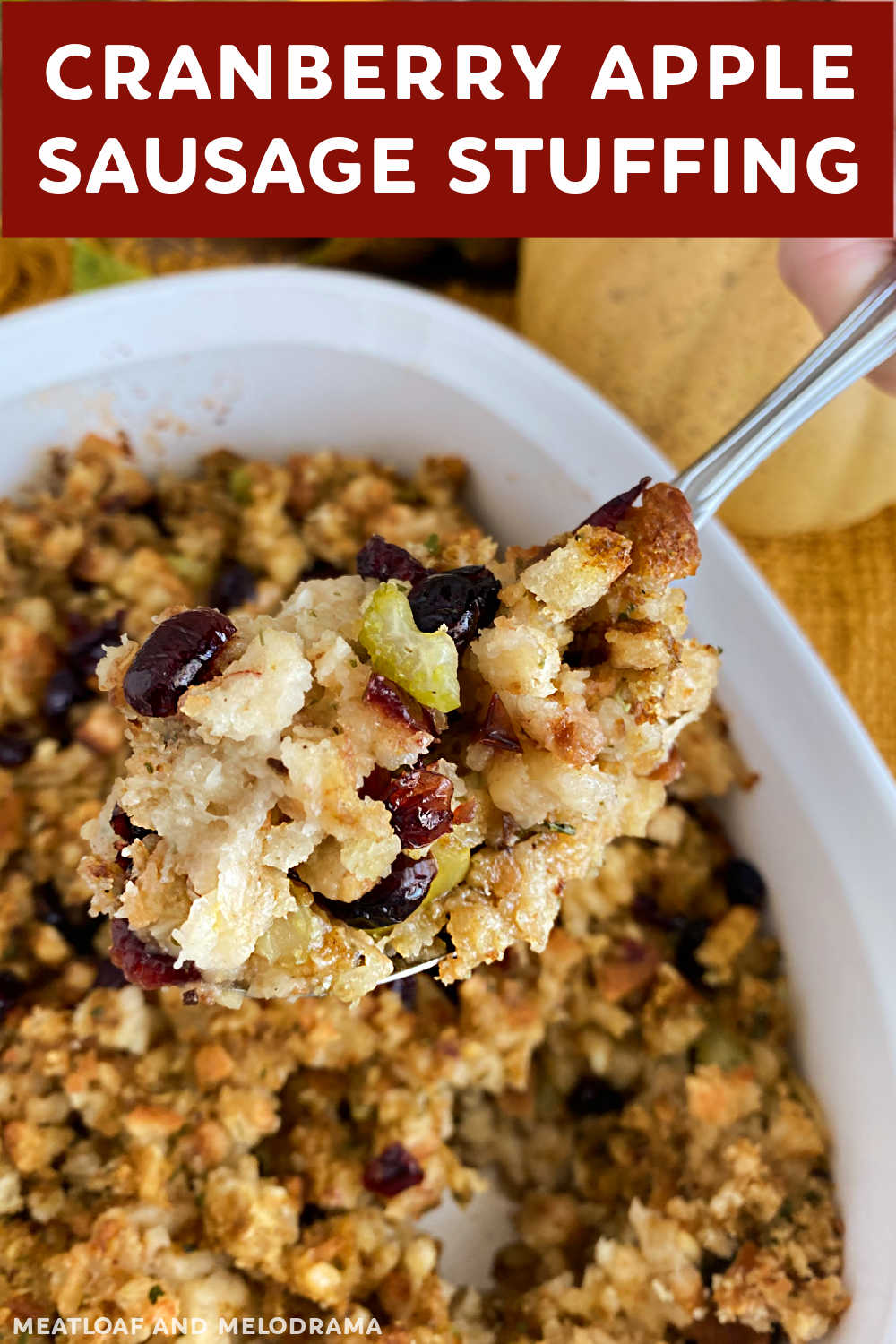 If you're looking for a new Thanksgiving side dish, try our favorite homemade stuffing recipe. This easy cranberry apple sausage stuffing is a flavorful blend of rosemary bread cubes, seasoned sausage, crisp apples and dried cranberries.

Trust me, you won't be disappointed!

We have been making this sausage apple cranberry stuffing for several years now. My entire family says it is the best stuffing recipe ever! Even my picky, stuffing-hating kids had no complaints.

I'm all about keeping our Thanksgiving menu as simple as possible, so I stick with easy side dishes like stovetop candied yams, Instant Pot corn casserole, mashed potatoes and green beans.

This sausage stuffing is no exception. Because, even though it has a lot of different flavors, it's super easy to make.

This homemade sausage apple stuffing recipe starts out with dried bread cubes that you make from a loaf of crusty rosemary sourdough bread.

I found this bread in the bakery section of a couple of different stores near us, and it really adds a ton of flavor to the stuffing.

Making the bread cubes is easy. You just cut up the bread, and place the cubed bread in a single layer on a large baking sheet. Toast it in the oven for about 20 minutes, and you're done.

When the bread is done, start the sausage mixture. I use breakfast sausage, but you can use Italian sausage, turkey sausage or chicken sausage.

First, melt butter, and saute the onion and celery in a large skillet over medium-high heat. Then, add the sausage, and cook until brown.

Add the apples, cranberries and seasonings, and stir until combined. Pour sausage mixture to a large bowl. Then, add the dried bread cubes, 2 cups chicken stock or broth, and mix well.

At this point, you either bake the stuffing in a casserole dish or baking pan, or you use it to stuff your turkey.

We usually cram what we can into the main turkey cavity, and then we save the rest of the stuffing to use with leftovers.

Make ahead of Time

You can also make this stuffing ahead of time -- That's what we do. You can prepare and bake the bread cubes 3 to 4 days in advance. Store them in an airtight container in a cool, dry place at room temperature.

Then, make the sausage mixture the night before Thanksgiving, and add the prepared bread cubes.

Store the stuffing in an airtight container overnight. Just cook it the night before, and it's ready to use the morning of Thanksgiving.

It makes Thanksgiving Day so much easier by cutting down the prep time on that day!

We really like the flavor of rosemary bread, but you can use whatever type of bread you'd like. White bread, whole grain bread, and plain sourdough will work just as well.

You can some fresh rosemary in place of the rosemary bread!

Instead of pork sausage, use chicken sausage or turkey sausage-- it's up to your personal preference. You can also substitute turkey stock or vegetable broth for the chicken stock.

Or, forego the sausage completely for a meatless stuffing!

Green apples pair well with the tart cranberries, but if you find them too sour, use sweet apples instead.

Store any leftover stuffing in an airtight container in the refrigerator. I don't recommend freezing this cranberry stuffing, though, because the toasted bread chunks won't thaw well.

You can also use leftover stuffing to make a delicious leftover turkey stuffing casserole! 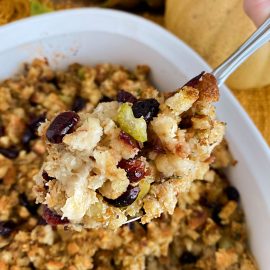 I hope you enjoy this apple cranberry sausage stuffing recipe as much as we do!

For new recipes perfect for the holiday season, be sure to subscribe to the newsletter!