Learn how to make a Fried Bologna Sandwich with melted cheese for a super easy dinner or lunch that's very budget friendly.

If you've never had a fried bologna and cheese sandwich, you're missing out on cheap and easy comfort food. This budget friendly meal takes just a few minutes to make, so you can have lunch or dinner on the table in no time.

I grew up on fried bologna or fried jumbo sandwiches, as my mom called them. It'a a Pittsburgh thing.

So if you've never heard of frying bologna, no worries! One bite, and you'll be glad you tried it!

You might also like to try a Grilled Peanut Butter and Banana Sandwich, Pizza Grilled Cheese or a Polish Sausage Dog.

How to Fry Bologna

If you're not a bologna sandwich fan, frying bologna makes it completely different. The meat loses its fat and becomes nice and crispy around the edges.

You'll want to allow for at least 2 or 3 slices per person. As the fat renders out, the slices get a lot smaller!

Just add your bologna slices to a frying pan, and cook on medium heat. When the middles bubble up and the edges curl up, it's done.

When the meat is done, it's time to add your favorite cheese. Mom and Grandma always used provolone, so I think that's the way to go.

You can use your favorite cheese, though -- American, cheddar and Swiss are also good. Just use cheese that melts easily.

Provolone melts almost instantly. So when it's melted, it's time to build the sandwich!

Toasted bread is definitely the way to go. You want the bread to be firm enough to hold the hot meat and cheese.

You can toast the bread in the toaster or air fryer. Then, spread some mayo on the insides, and add your meat and cheese.

Lettuce and tomato are optional, but so good. My favorite! 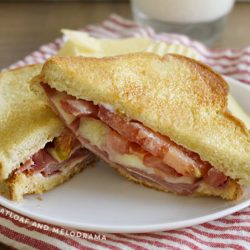 You can drain the fat from the skillet before adding the cheese or lift the meat and cheese out of the skillet and allow the grease to drip off before making the sandwiches. You can use your favorite cheese for the sandwich.