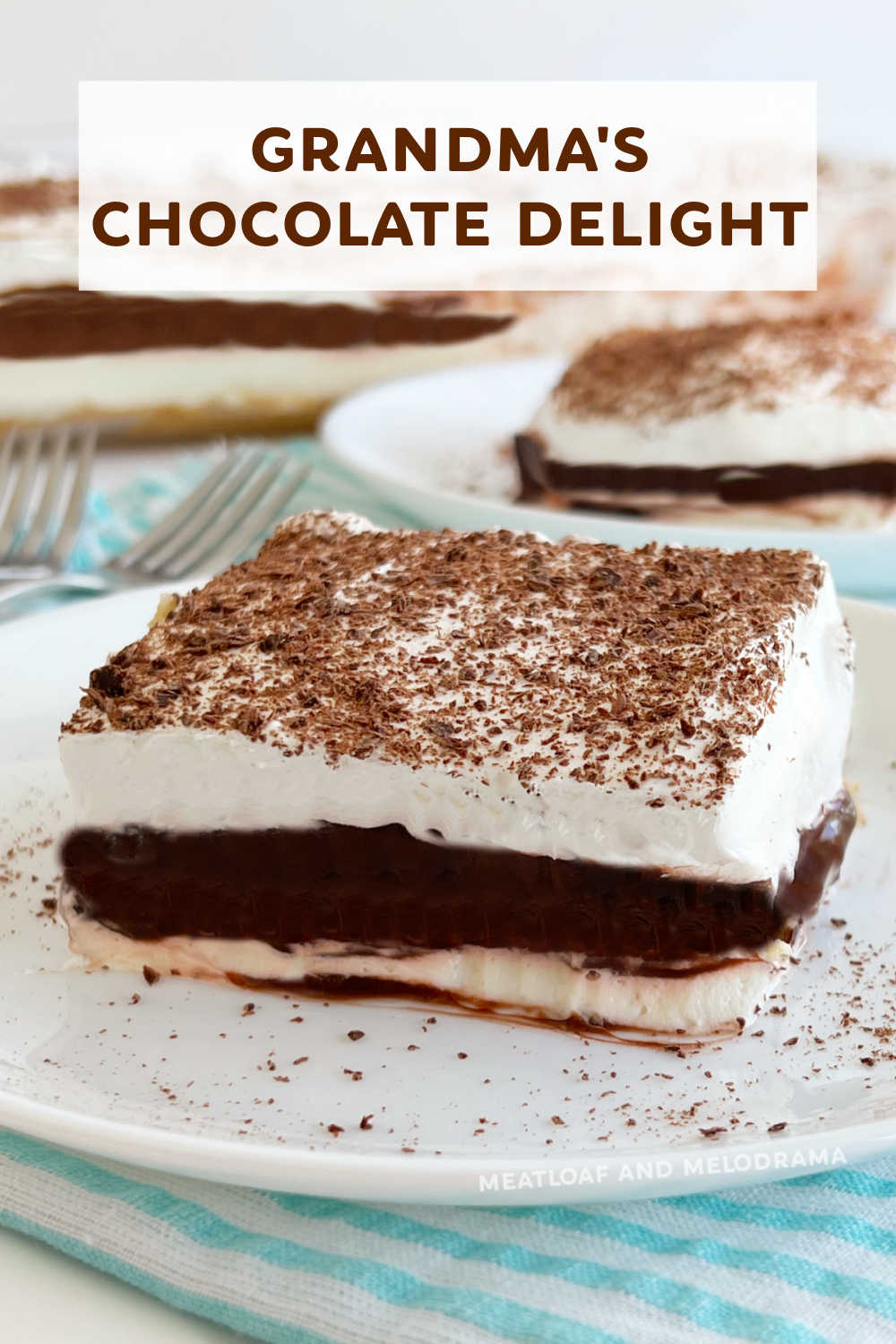 Grandma's Chocolate Delight Recipe is a simple layered dessert with pudding, sweetened cream cheese and whipped cream on a shortbread crust. This cool, creamy treat will be one of your favorite desserts for family gatherings, holidays or any day!

This incredibly delicious chocolate pudding dessert is the perfect dessert for chocolate lovers!

With a layer of cheesecake filling topped with a rich chocolate pudding layer, whipped topping and chocolate shavings, this chocolate delight recipe definitely lives up to it's name!

Like Pineapple Dream Dessert and Grandma's Lemon Bars, this old fashioned dessert has been around for ages and goes by many names.

Chocolate delight makes enough to feed a crowd. It's perfect for a church potluck, family gathering, holiday dinners or any special occasion!

You only need a few simple ingredients for this chocolate delight recipe. What you don't already have at home should be easy to find online or at your local grocery store:

How to Make Chocolate Delight

Before you start on the chocolate delight, preheat oven to 350 degrees F. Also, grease a 1 3x 9-inch inch pan with non stick spray or butter.

To make the crust, in a medium bowl, combine flour with softened butter until well combined. Use an electric mixer on low power, pulsing the mixer to break up the butter clumps without flinging flour everywhere.

Once the crust mixture is well combined, scoop it into the prepared baking pan. Press the crust into the bottom of the pan, keeping it an even layer, and making sure that the whole pan is covered.

Bake the crust for 25 minutes at 350 degrees F. It should be golden brown and firm.

When the crust is finished baking, remove it from the oven and let it cool completely at room temperature.

Now it's time for the cream cheese layer. In a medium mixing bowl, beat softened cream cheese with an electric mixer until its smooth and creamy.

Then, add powdered sugar and Cool Whip, and mix until creamy and well combined.

Gently spoon the cream cheese mixture over the cooled crust in the baking pan, and spread with a spatula. This first layer should be even and cover the crust entirely.

Place the baking pan into the refrigerator so that the cream cheese layer can set.

When the cream cheese has set, it's time for the pudding chocolate layer. In a large bowl, add milk and the vanilla and chocolate instant pudding mixes. With a whisk, mix pudding mixes with milk until thick and well combined.

Spoon the chocolate mixture over the first layer, spreading gently. Make sure that the pudding layer covers the cream cheese entirely, and is an even layer.

Place baking pan into the refrigerator for the second layer to set. This should take around 30 minutes.

Now onto the last, third layer. Spoon Cool Whip over the pudding layer, and spread evenly. This is the top layer, so make it look nice and smooth!

I use about 2 cups of Cool Whip for this layer, but you can use a bit more if you like.

Sprinkle chocolate shavings on top of the Cool Whip. You can use store bought shavings, or grate your own with a cheese grater.

Refrigerate your layered chocolate dessert for 3 hours, or overnight. Then, enjoy!

Store your chocolate delight dessert in the refrigerator, in an airtight container or covered with plastic wrap. It'll last 3 to 4 days.

There are a couple ways to customize this delicious one pan dessert!

Instead of the flour and butter crust, make a graham cracker crust or cookie crust. You can also add chopped pecans to the crust, for a pecan shortbread crust.

Use whatever type of pudding you like for the puddling layer. I think mixing 1 instant chocolate pudding mix package with 1 vanilla mix gives the perfect amount of chocolate, but you can use both chocolate puddings, or both vanilla puddings.

Top the Cool Whip with chocolate sauce or a melted chocolate drizzle. You can also add fresh or canned fruit to this decadent dessert! 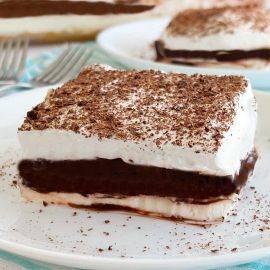 Recommend using 2 8 oz tubs of Cool Whip or 12 ounce tub so you have enough topping. You can speed up the setting and cooling time by freezing each layer before adding the next. Recipe works best if made ahead of time to allow plenty of time for layers to set. This makes it easier to cut.

With its creamy layers and rich chocolate flavor, Grandma's delicious chocolate delight recipe is always a popular choice in my house!

For more easy recipes, easy dessert recipes, and similar recipe ideas, subscribe to the newsletter and follow me on social media!