Hi All!
It's August, which means Halloween is just around the corner -- right? Well, maybe not quite, but since Halloween ideas are all over Pinterest right now, I thought I would share some ideas for throwing a Harry Potter party.
My oldest daughter has continued to have birthday parties well into her teen years. It's funny because my other teen prefers much quieter celebrations. Anyway, the oldest baby has a large group of fun-loving friends who all love the Harry Potter series, and she thought it would be fitting to have a party with a Hogwarts theme. 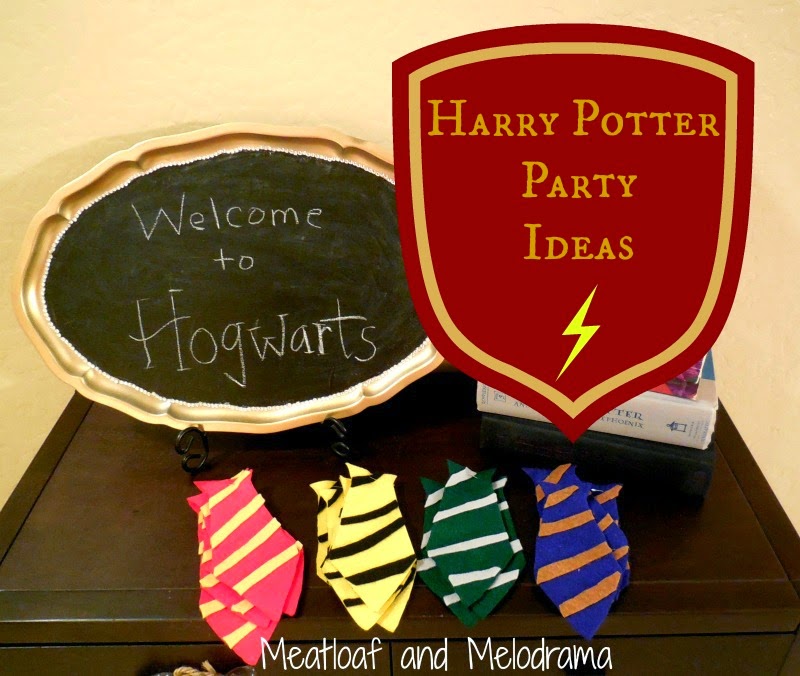 If you want to have a Harry Potter party, now is a great time to start planning and looking for props and party decorations. My daughter's party was in the winter, and because we didn't plan ahead, it was hard to find some things she wanted. But, being a thrifty DIY family, we made most of the props and decorations on our own.

My daughter made the invitations to look like the Hogwarts invitation letters. She printed them out, folded them and handed one to each of the 20 guests. Yep, we had a house full of teens that day, and I survived to tell about it!

I took all of these photos as the party was being set up, so the lighting isn't all that great. But, these are not staged, so you can get an idea of what everything looked like.
The guests were encouraged to come in costume, and a lot of them wore big Harry-style glasses and short capes. You can find these throughout the year. We had wooden posts outside with names of places from the series. We also had a sign with Platform 9 and three quarters, and this was taped to the front door. 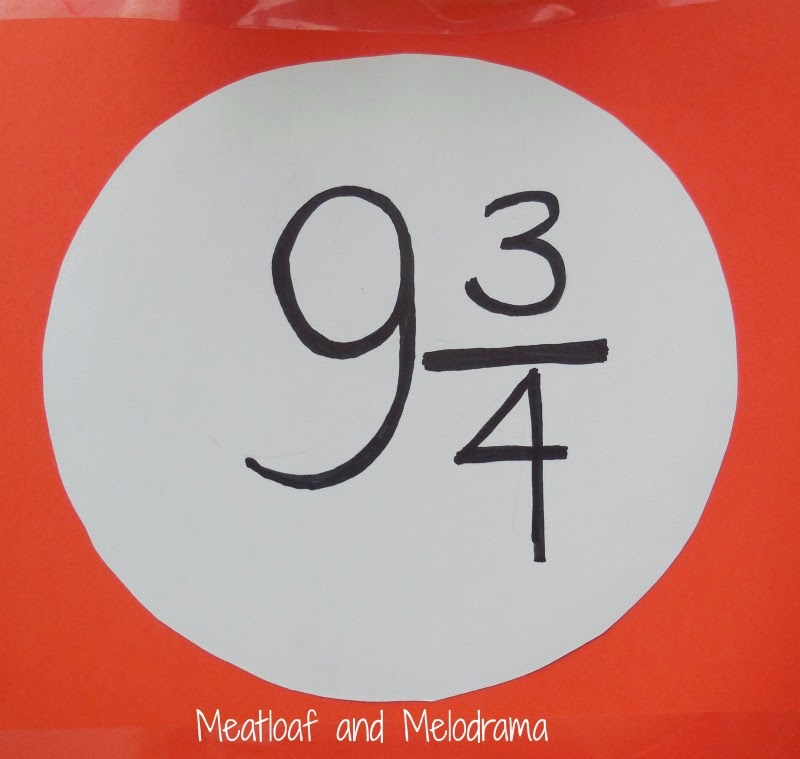 As the guests entered, they were asked to take a wand. These were branches that were spray painted black. We also found this cute owl and put it among the wands. I think it really resembles Harry's owl, Hedwig! 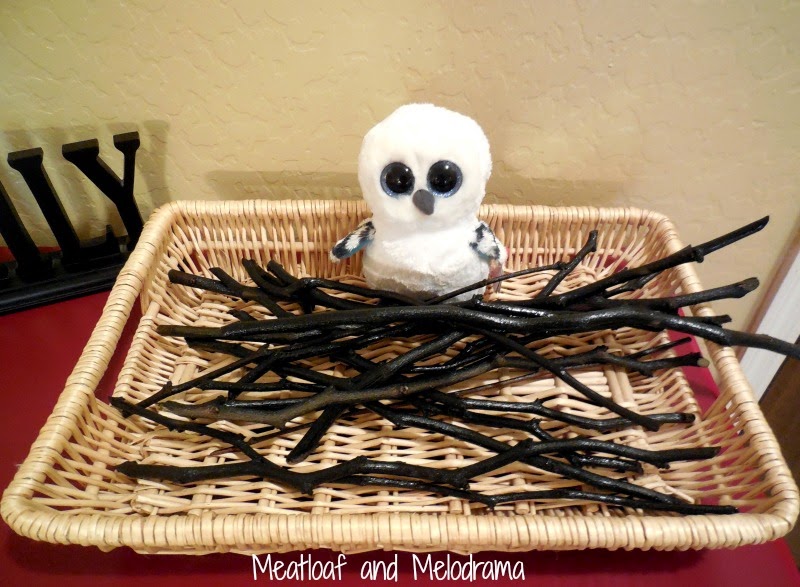 When all the guests had arrived, my daughter had them gather around the Sorting Hat. She made this by taping and pinning pieces of brown felt over a really beat-up witch's hat that was leftover from Halloween. She also taped black felt to make the face. 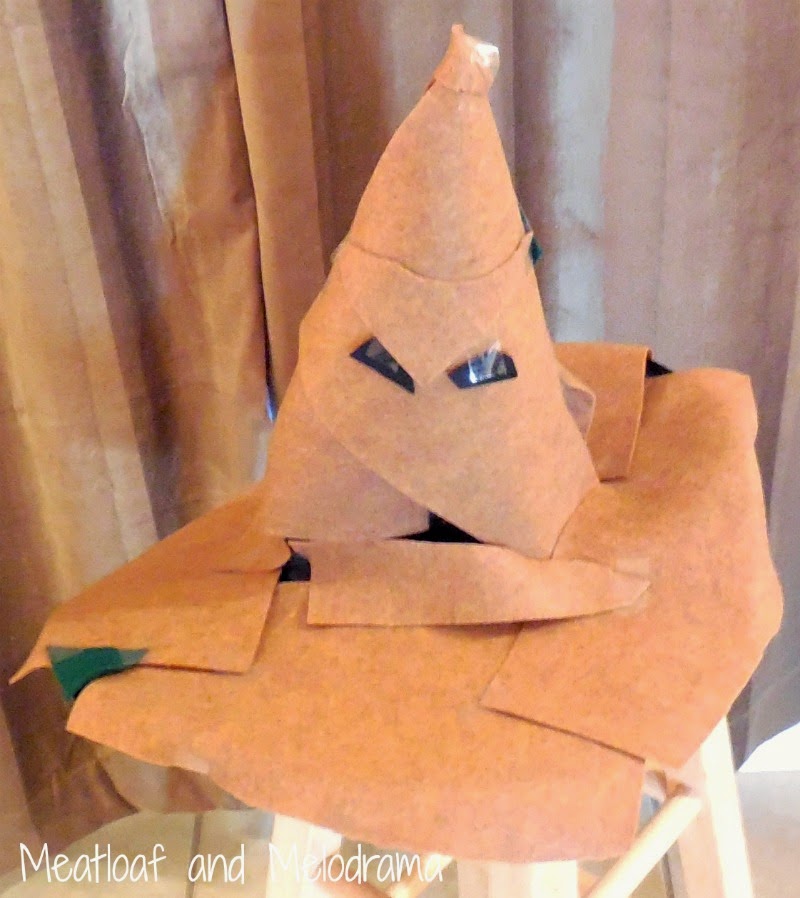 Each guest sat on the stool and put the hat on. My daugher had made a list of what house each person was assigned to, and my younger kids took turns playing the hat's voice. They hid under the table and would shout out the name of the house. The guests had a lot of fun with this part!

After the sorting ceremony, the guests had to choose a tie that represented the correct house. 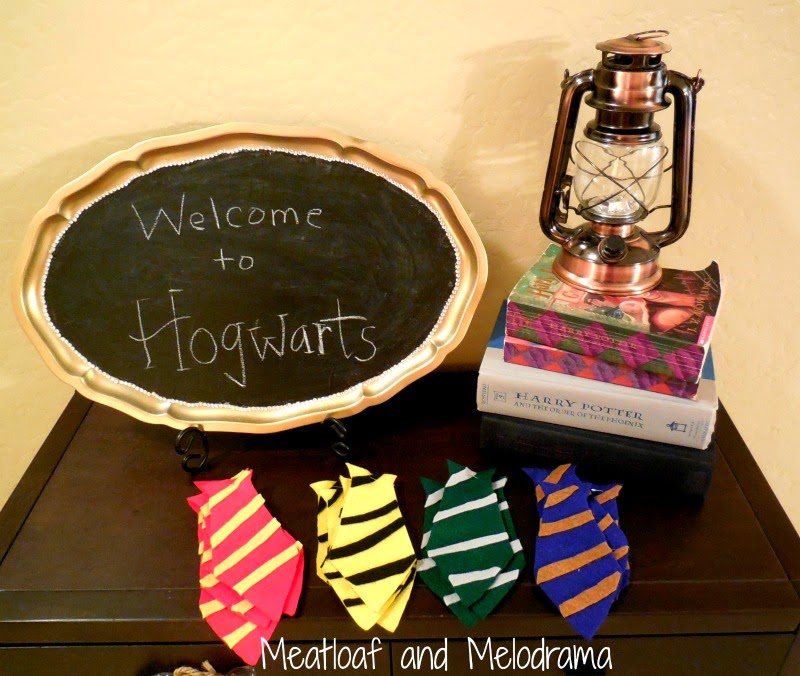 My daughter made the ties from felt, and we used saftety pins to pin them to the guests' clothes. I placed a stack of Harry Potter books next to a chalkboard tray and added a lantern on top.
Here is a sample of some of the snacks we put together. We made labels and attached them to some empty jars. The labels are hard to read, but in the bowls, we have Drooble's Best Blowing Gum, Baby Dragon Eggs, Flobberworms and Bertie Bott's Every Flavor Beans. Do you see the water bottle in the background? It's almost like the Downton Abbey picture! 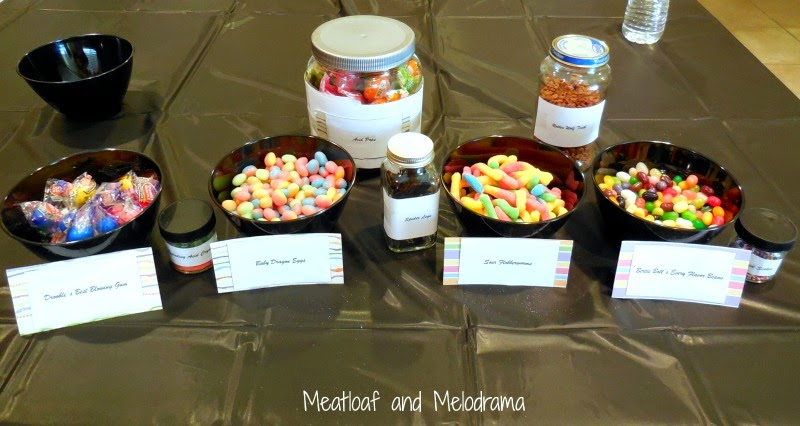 We also made pretzel wands out of large pretzels, melted white chocolate and colored sprinkles. These were meant to resemble how the wands looked in the battle between Harry and Voldemort. We made cupcakes with vanilla frosting and made lightening bolts with yellow gel coloring on top. I can't believe I didn't get a picture of one! 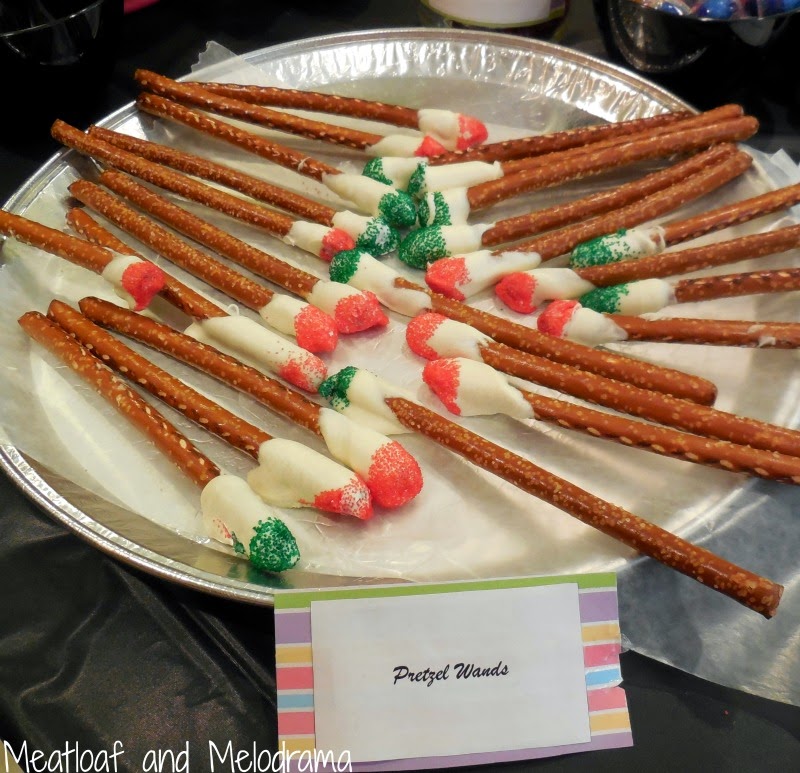 In the bathroom, we hung a sign above the toilet, which told how to get to the Ministry of Magic! 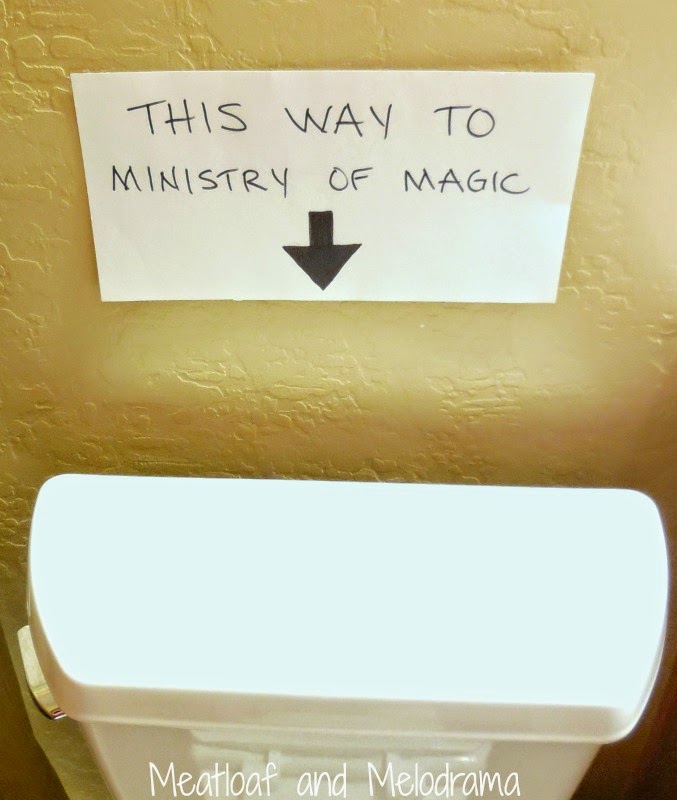 We also used red lipstick to write a message on the bathroom mirror about the Chamber of Secrets being opened. We have a small front bathroom, and I couldn't get a good picture. Let me tell you that this was not easy to erase!
We made this photo prop and my daughter took pictures of her friends as they held up the signs. 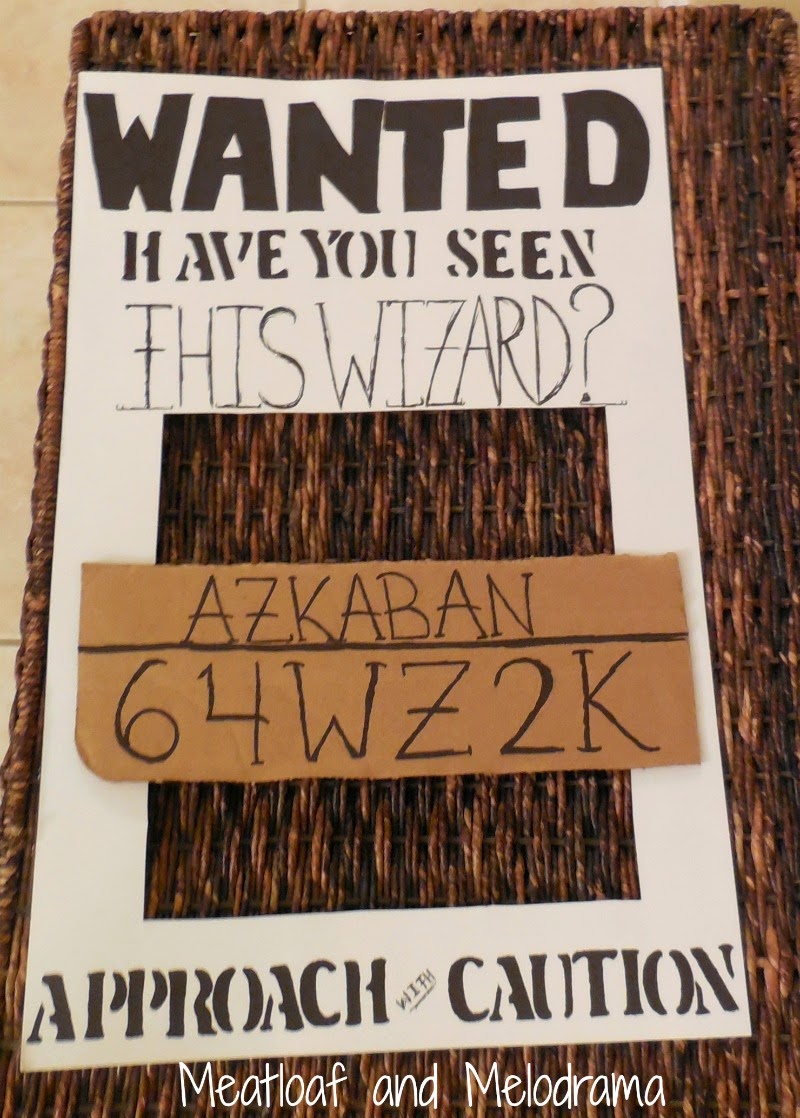 There isn't room for all of the pictures here, but I wish there was! To mimic the dining hall, we placed two tables together, lengthwise, to make one large table. We covered this with black plastic tablecloths and used cheap Dollar Store silver trays to hold plates of food.
The kids had a blast, and they were so surprized by the all of the different decorations. We also drew owl faces on some white balloons and let them float around the house. But, you can see that there are so many fun things you can do with this type of party. And, you don't have to spend a lot of money to get the effects you want!
Have you ever had a Harry Potter party? I would love to hear about your ideas!
Thanks for visiting -- have a great day!
Dee 🙂