If you’re looking for an easy Christmas ham recipe, you’re going to love this delicious cranberry orange Crock-Pot ham. You only need 4 ingredients, and your slow cooker can do all the work!

We always have Turkey for Thanksgiving, but for Christmas, it’s all about the ham. I used to bake our holiday ham, but a couple of years ago, I started making it slow cooker, and it was so incredibly good and completely fuss free!

This easy Crock Pot ham recipe has a glaze made with jellied cranberry sauce and orange marmalade, so it’s perfect for Christmas or Thanksgiving. But hey, you can make it anytime!

Cooking ham in the Crock Pot frees up valuable oven space, which you can use for all those yummy holiday side dish recipes. It also won’t heat up your kitchen, which is a plus if you’re like me and live in a warm climate!

Like most meals made in the slow cooker, ham also super easy to prepare, which makes it perfect for any holiday dinner. Even though I love to cook, I’d rather be spending this time with the family!

The tartness of the cranberries combined with the sweetness of the orange marmalade makes an incredibly flavorful sauce that’s slightly tangy and not too sweet. And, it pairs very well with the ham.

Since the ham is already cooked, you just need to warm it up until the temperature reaches 140 degrees. You don’t want to cook the ham so long that it dries out!

An 8 pound cooked spiral cut ham takes about 4 to 5 hours on low to cook in the Crock Pot. You can also cook it on high for about 3 hours — just keep an eye on it!

A small precooked uncut boneless ham cooks even faster — anywhere from 2 to 4 hours on low. I’ve used this recipe for both bone-in and boneless hams with great results.

I do like the bone-in spiral cut hams because they’re super easy to serve. And, you can use the bone to make ham and lentil soup! 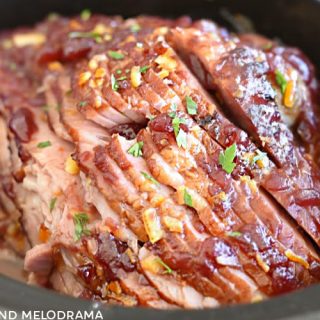 If lid doesn’t fit on Crock-Pot, use foil to cover ham under lid or trim ham to fit. Actual cooking time will vary with size and type of ham you have.

If you like this recipe as much as we do, leave a comment or give me a shout-out on social media!

If you’re looking for natural, locally-sourced meat in the Phoenix area, check out The Meat Shop. This is where we get our hams and other meat products whenever we can, and honestly, they’re the best! This isn’t sponsored or anything. We’ve been going here for years, and I just wanted to give them a shout-out! 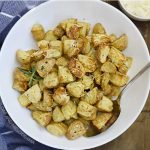