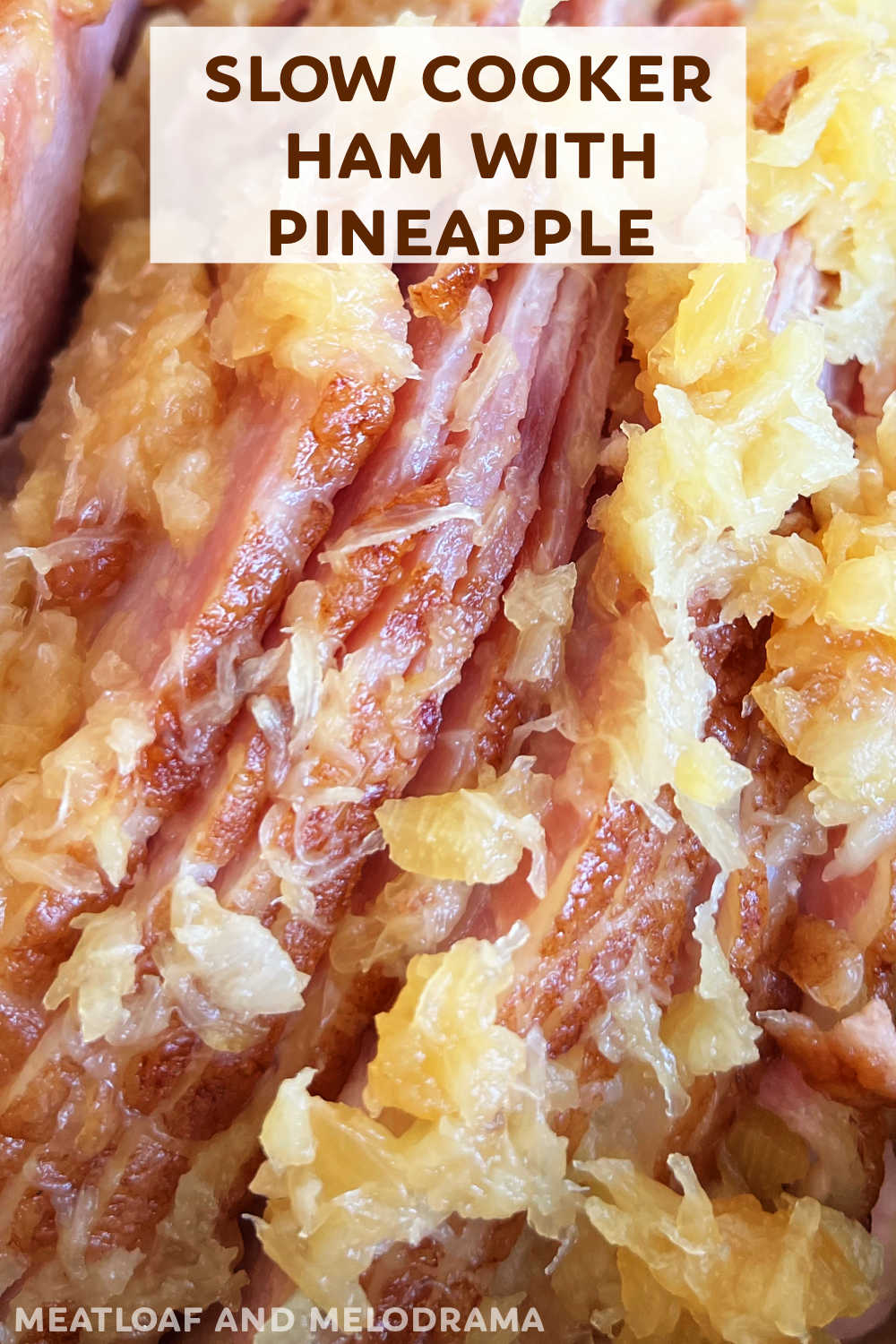 This Slow Cooker Brown Sugar Ham with Pineapple cooks low and slow in the crock pot for incredible flavor. Our easy recipe makes the best holiday ham for Easter dinner, Christmas dinner or any special occasion!

We usually serve this crock pot ham at Easter and some spring and summer holidays, like Mother's Day or July 4th.

Crock Pot Cranberry Orange Ham is ideal for Christmas and winter holidays. But this is just a personal preference!

You only need 3 ingredients to make brown sugar ham with pineapple. You should be able to find them in the grocery store if you don't have them in your pantry.

You will also need a large slow cooker. I use a large 7 quart Crock Pot. Non stick spray is also good as it makes clean-up easier!

How to Make Slow Cooker Ham with Pineapple

So, a lot of people wonder how to cook a pre cooked ham in the slow cooker. It's very, very easy!

First, give the sides and bottom of the slow cooker a quick spritz with non stick cooking spray. Then, place ham bottom side down in the slow cooker.

If the ham doesn't quite fit, you can trim a little bit off until the ham fits. Or, cover with aluminum foil under the lid to form a seal.

Next, pour the crushed pineapple over and around the ham. I like to open the spiral cut ham a little to allow pineapple to get in between the slices.

You can also pat the sugar into the sides of the ham, as well. As the ham cooks, it will form a delicious brown sugar glaze!

Cook the ham for 2 to 4 hours on low. Since this is a precooked ham, the cook time is short because you only need to warm it up to an internal temperature of 145 degrees f. Mine was done at 3 hours.

If you are in a hurry, cook the ham for 1 to 2 hours on high. Once the ham is hot, you can switch to the warm setting until you are ready to serve.

You can baste the ham with the pineapple juice during the cooking process or at the end, if you like.

Total cook time depends upon the size and brand of slow cooker.

How to Store and Reheat

Store any leftover ham in an airtight container in the refrigerator, where it'll last for 4 to 5 days.

If you have plenty of leftovers, try Instant Pot Mac and Cheese with Ham, pineapple ham fried rice, or these recipes for leftover ham.

Be sure to save the bone for Instant Pot Ham and Lentil Soup!

There are a couple ways tp customize this brown sugar pineapple ham to your liking.

For a little extra sweetness, add a tablespoon or 2 of honey or maple syrup to the ham glaze.

Baste the ham with some orange juice for a delicious tang that complements the sweetness of the pineapple mixture.

Looking for the best side dishes for ham? We love cold dishes like potato salad, marshmallow fruit salad or strawberry jello salad for Easter ham. 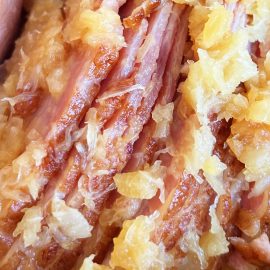 All slow cookers are different. Cook times will vary with different brands/models and the size of the ham. Baste ham a couple of times with juices, during cooking process, if desired

This delicious crock pot pineapple ham is perfect for a holiday dinner, and the leftovers make an easy weeknight meal.

I hope you enjoy this flavorful ham with pineapple glaze as much as we do! Be sure to leave a star rating and/or comment!

For more best ham recipes, slow cooker recipes, and holiday meal ideas, be sure to subscribe to the newsletter and follow me on social media!