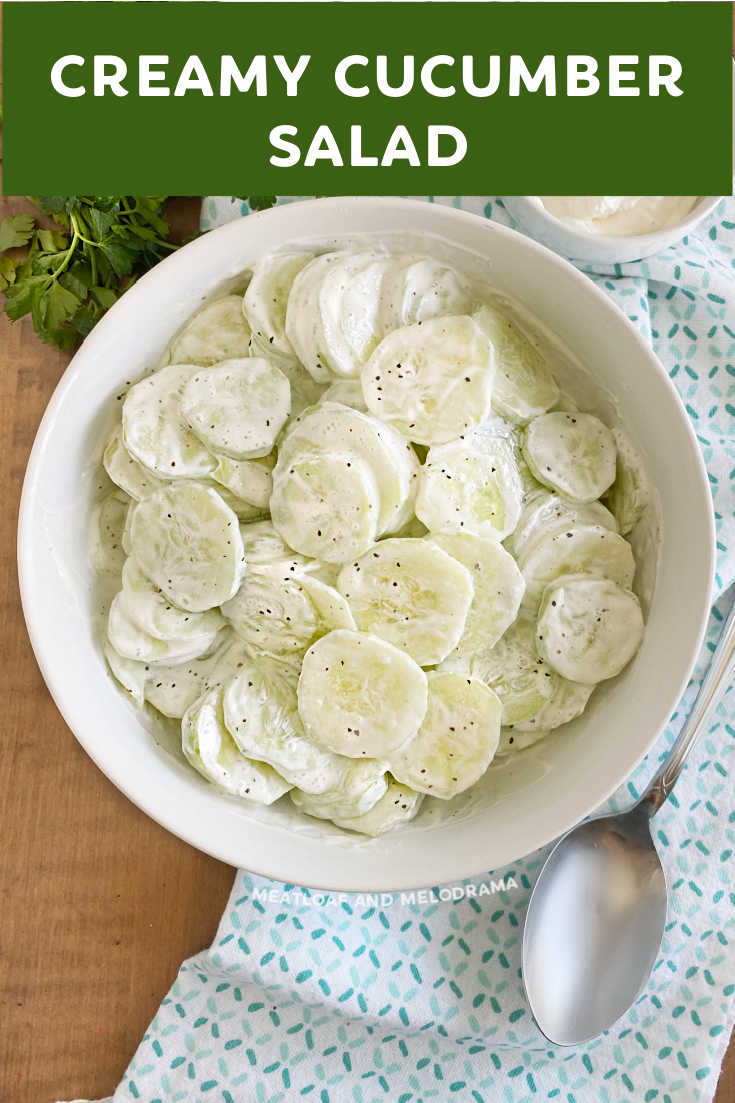 Creamy Cucumber Salad with sour cream is cool, crisp and takes minutes to make. This quick and easy summer salad recipe is a classic side dish that goes well with just about anything. Serve it with beef, pork, chicken or seafood for the perfect complement to any meal.

When I was growing up, this sour cream cucumber salad was on the table very frequently during the summer months. Sometimes, my mom would make it and sometimes my grandmother would, but either way, it was always cool, creamy and completely delicious.

We had it with ribs, steaks, burgers -- you name it. That's the great thing about this easy side salad -- it goes well with pretty much anything. And, you can make it in just a few minutes.

Now personally, I like the taste of cucumbers, and it doesn't matter how they're prepared. I can eat them plain -- well, with a little bit of sea salt. I also think the cukes add some awesome crunch to tossed salads, and I love them with a bit of vinegar and olive oil. And pickles? Wonderful!

You only need 6 ingredients for this old fashioned creamy sour cream cucumber salad.  It's made with sour cream, no mayo -- and without dill. I love cucumber dill dip, and dill dip but I don't like dill in cucumber salad! Strange but true!

How to Make Creamy Cucumber Salad

You can use a mandolin slicer if you prefer. I don't, since I personally don't like super thin cucumbers in this salad.

Then, you sprinkle a little bit of sea salt and pepper over the cukes. You can use regular salt if you want, but I love sea salt, especially pink  Himalayan salt, so that's what I use. My kids love helping out with the seasoning, so I usually let them do this part.

Note -- Many recipes call for salting the cucumbers to remove extra water before adding the sour cream. If you're eating the salad right away, you don't have to do this. My mom and grandma never did, so I skip this part.

However, if you want to make the salad ahead of time this step prevents the salad from becoming too watery as it sits. Just salt the cucumbers, allow them to drain in a colander, then rinse, and stir in the dressing.

Then, mix the sour cream, vinegar and sugar in a separate bowl until creamy. After that, you just stir the dressing with the cucumbers, and you're done! We never add onions to our cucumber salad, but you can add thinly sliced red or yellow onions if you like.

This quick and easy cucumber salad has been around forever, but you all know by now that I have a huge soft spot for classic retro recipes. I like to serve them every now and then just so that my kids can taste the dishes that their parents and grandparents grew up with, and in this case, I also just love how it tastes.

How easy is this?! Anyone else grow up with this creamy cucumber salad? I've seen some recipes that call for dill, which sounds good too, but that's not how my mom and grandma made it.

Store the salad tightly covered in the refrigerator. Cucumbers release a lot of water, so leftover salad may get runny even if you salt the cucumbers as I mentioned above. Just drain the excess liquid before serving. 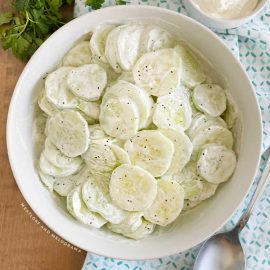 Best when served right after making. To make ahead of time, you can remove excess water by salting sliced cucumbers and draining liquid in colander for 30 minutes. Then, rinse, and add sour cream mixture. Add thinly sliced yellow or red onions if desired.