2 Ingredient Dough Cinnamon Rolls are made without yeast and need no rising time. These homemade cinnamon rolls are quick, easy, light and delicious!

If you like homemade cinnamon rolls but don't like all the work, you're going to love this super quick and easy cinnamon roll recipe! No waiting for the dough to rise -- just mix, roll, fill and bake!

We love making 2 ingredient bagels, but when my daughter decided to use the basic Weight Watcher's dough for cinnamon rolls, I was super skeptical.

Seriously, you guys, these quick and easy cinnamon rolls are amazing! They're light, airy and so good!

How Does 2 Ingredient Dough Work

You combine self rising flour with Greek yogurt. Baking soda in the flour helps it rise, and the yogurt makes the dough soft and pliable.

While the base dough is two ingredients, we added a little sugar, vanilla extract and a pinch of cinnamon to flavor the dough.

You can stick to the basic recipe if you want. We just felt that the dough needed a little something extra to taste more like cinnamon rolls.

How to Make Homemade Cinnamon Rolls without Yeast

Start by adding the Greek yogurt and the self rising flour to a large mixing bowl. Add some vanilla, sugar and cinnamon, and mix well.

This dough is different from yeast dough. So, if you've ever made traditional homemade cinnamon rolls before, don't worry that it doesn't look the same.

It will also be on the sticky side. You can add a little extra flour if needed.

Form the dough into a ball, then place it on a well-floured surface. You'll have to knead the dough for a couple of minutes until it's no longer sticky.

Roll the dough into a small rectangle. Then, spread the cinnamon filling over the dough.

Roll the dough over the filling. We found that using a knife or a dough scraper made this part easier and kept the dough from sticking.

Pinch the dough, and cut the roll into evenly into smaller rolls. You'll get about 8 to 10 rolls from this recipe.

Place the rolls into a buttered baking dish. Then, brush the tops with a little melted butter, and bake.

The cinnamon rolls take about 25 minutes to 30 minutes in a regular oven. But, I wanted to try them in the air fryer.

I used my Instant Pot Omni Plus air fryer on the bake setting, and they took just 15 minutes! We're talking super quick and easy cinnamon rolls!

Top with you Favorite Frosting

We made a basic cream cheese frosting for the cinnamon rolls. And honestly, I thought they tasted as good as my regular cinnamon roll recipe. I

If you're following Weight Watchers, you can top with your favorite frosting recipe or use a light glaze. You can even eat these plain! 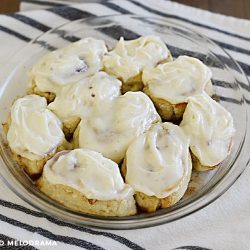 If dough seems very sticky, add more flour, a little at a time until it's manageable.  Use a knife or dough scraper to make it easier to roll the dough into shape. If you're using air fryer instructions, time may vary with different makes, models.