Baked Ham and Cheese Roll Ups with Barbecue Sauce take 20 minutes to make and are perfect for a quick and easy dinner, game day snack or party appetizer! 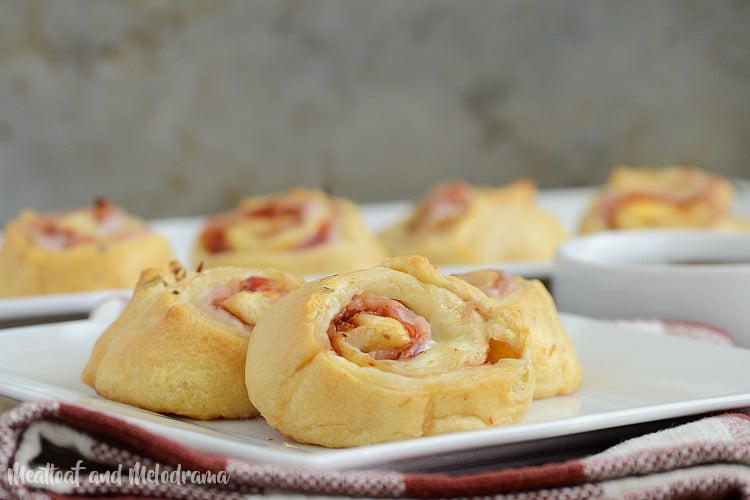 You’ve probably seen similar recipes before. I know I have. But, the ham and cheese roll ups I’ve seen usually have Swiss cheese and, maybe, a honey mustard sauce for extra flavor. So, this version is just slightly different!

I was getting ready to make my go-to ham and cheese sliders for dinner the other day, but when I found an extra tube of crescent roll dough left over from making sriracha mummy dogs, I decided to try something different. Instead of making ham and cheese sandwiches, I made these hot ham and cheese roll-ups, instead.

Basically, all you do is take the crescent dough out of the tube and roll it out so that it’s one big rectangle. Then, you layer the cheese and ham, and you brush on the BBQ sauce. 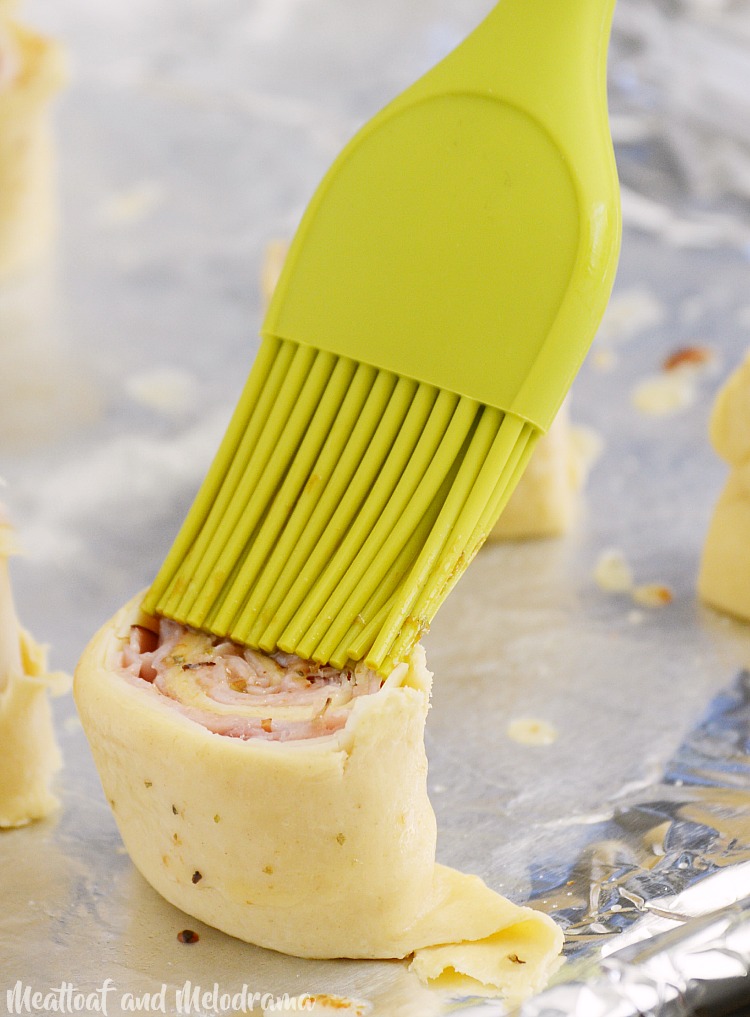 Next, you roll the dough up into a log, and cut it up into smaller pieces. I made mine about 1-inch thick, but you can make the slices smaller or, even, larger if you want.

For a little extra flavor, I melted some butter, added a little bit of Italian seasoning and brushed this over the rolls. This is totally optional, but I think it makes the crescent rolls taste even better.

Here are a few tips for making the best baked ham and cheese roll-ups: 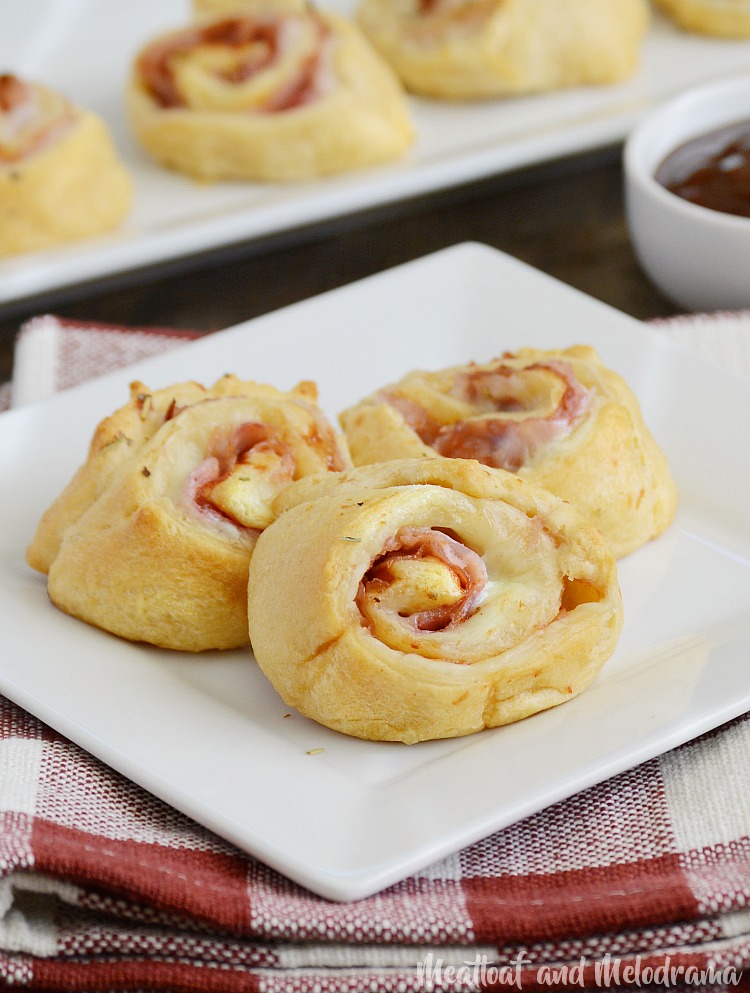 The ham and cheese crescents take about 15 minutes to bake, and then, they’re ready to go! My family loves barbecue sauce, so I served the roll ups with some sauce on the side.

My kids like to dunk these bite-size BBQ roll-ups in the extra sauce, but honestly, they taste perfectly fine straight from the oven. Serve them for a quick dinner, snack or easy holiday party appetizers. But, you might want to make extras — they go fast! 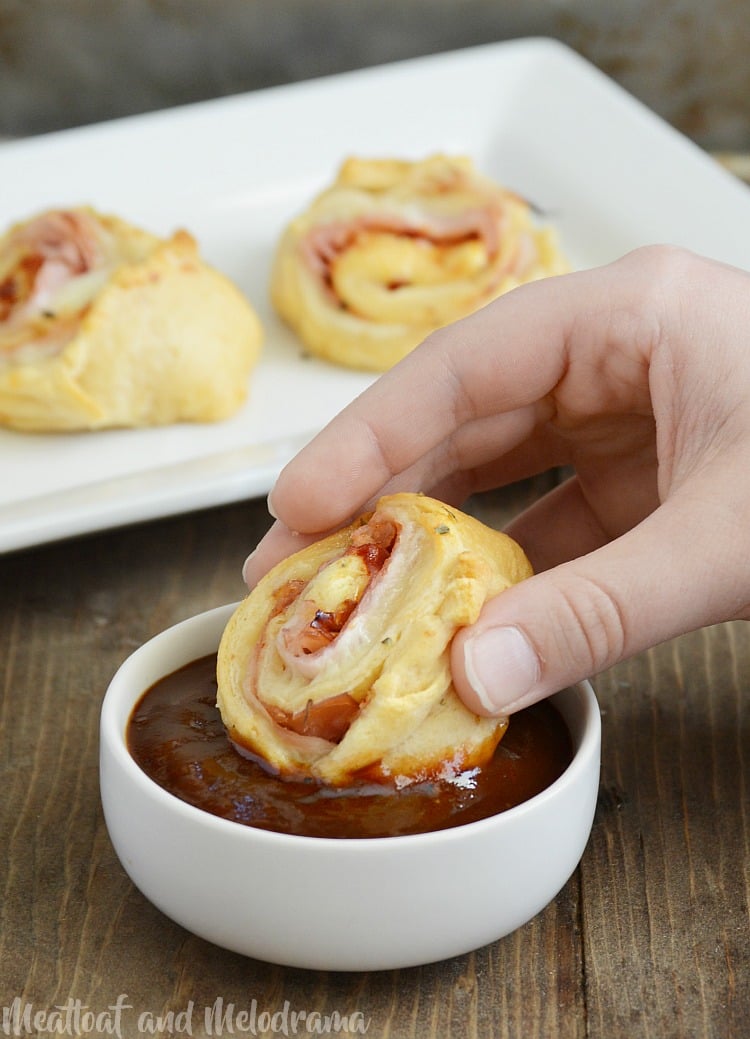 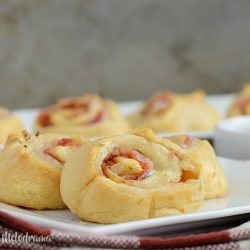 If you’re looking for a quick and easy dinner or just a super simple appetizer, give these baked ham and cheese roll ups with barbecue sauce a try. I hope you like them as much as we do!

Sharing this recipe at Weekend Potluck

These look so good! Perfect for parties or weeknight dinners!

This is a great recipe for those big game day events. Thanks so much for sharing your post with us at Full Plate Thursday! Have a great week and come back to see us real soon!
Miz Helen

These are so creative! Kids would love them!

BBQ sauce is perfect with these!

I really like the addition of the BBQ sauce! I think these will be a crowd pleaser!

I think these will be perfect for the game on Sunday!

That’s a great idea! I’ll definitely have to make them then!

I love recipes like this – so easy and everyone loves them!

Yes! Even the picky ones didn’t complain about these!