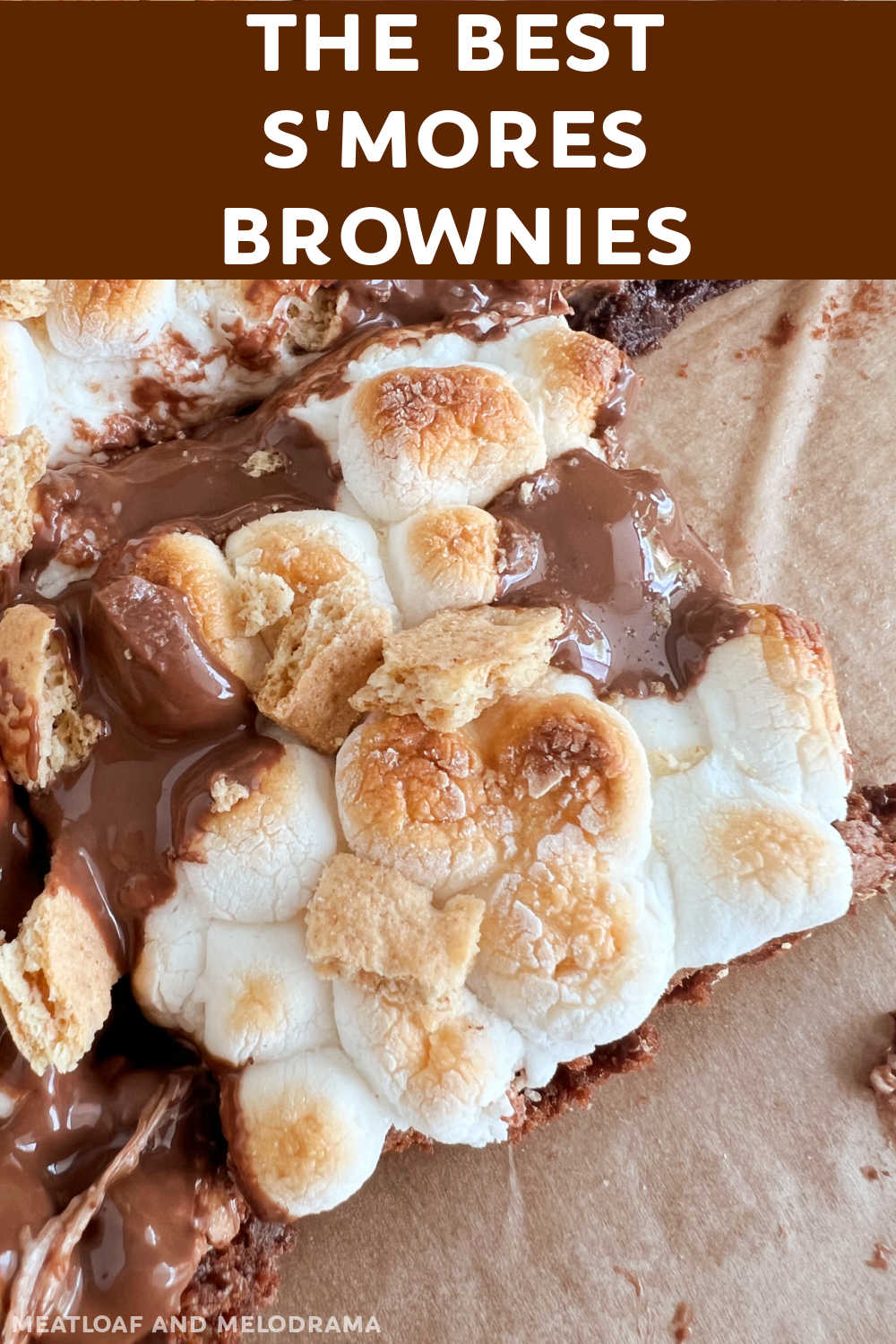 This S'mores Brownies recipe makes fudgy brownies topped with toasted marshmallows, graham crackers and chocolate bars. A delicious dessert you can make in one bowl. The whole family loves these homemade brownies!

So, what do you do when you're craving some serious ooey, gooey, chocolaty comfort food for? You whip up a big ol' batch of fudgy brownies topped with toasted marshmallows, graham cracker pieces and a chocolate bar!

These super delicious s'mores brownies are incredibly easy to make in just one bowl. So clean-up is easy, too!

In fact, this easy brownie recipe is so simple that my youngest daughter usually bakes them all by herself! Luckily, she shares them with us!

If you love s'mores as much as we do, try my S'mores Dip, Baked S'mores or No Churn Chocolate S'mores Ice Cream.

You need a few simple ingredients for these homemade s'mores brownies. What you don't already have at in your pantry can be found online or in your local grocery store.

How to Make S'mores Brownies

We use our favorite Double Chocolate Brownie recipe as the base for this s more brownie recipe.

Once it's melted, add the eggs and vanilla into the same bowl as the melted butter and chocolate mixture. Stir until thoroughly combined.

When the wet ingredients are well-mixed, add the sugar, cinnamon, flour, and baking soda, and stir. Lastly, stir in the remaining chocolate chips.

You can bake the brownies in a glass pan greased with nonstick spray. I prefer to use a meta pan lined with parchment paper. Just make sure it is a 9 x 13 pan.

When it's time to cut the brownies, just lift them out of the pan by the parchment paper. They're so much easier to cut, and you don't have to clean a sticky pan!

Preheat oven to 350 degrees f. Bake brownies for 20 minutes, or until a toothpick inserted in the center comes out clean. There may be some melted chocolate on the toothpick, though.

I recommend letting the marshmallows cool slightly. Then, you top them with cut-up chocolate bars and graham cracker pieces. That's it!

Store smores brownies at room temperature in an airtight container or covered with foil or plastic wrap.

These delicious chocolatey brownies should last 3 to 4 days -- they never stay that long in my house though!

There are a couple ways to customize these easy s'mores brownies to your tastes.

If you don't want to make homemade brownies, you can use a boxed brownie mix instead. Just follow the instructions on the boxed mix, and then top brownies with marshmallows, graham cracker crumbs, and chocolate pieces after baking.

Instead of crushing up graham crackers, use Golden Grahams cereal.

I love gooey marshmallows, but you can use marshmallow fluff on top of the brownies instead. Spread the fluff all over the brownies, and broil until golden brown.

I use milk chocolate Hershey bars like you would in traditional s'mores, but you can choose your favorite chocolate squares for these brownie bars. Or, use semi-sweet chocolate morsels or milk chocolate chips.

You'll want to dig right into these gooey fudgy brownies right away. But, if you want nice, clean cuts, you'll need to let them cool slightly.

The marshmallows are super sticky and messy. As the brownies cool down, it's a lot easier to handle them.

Pro tip: use a plastic knife. After brownies have cooled slightly, use. aplastic knife to cut them instead of a metal one. Brownie crumbs will not stick to the plastic. 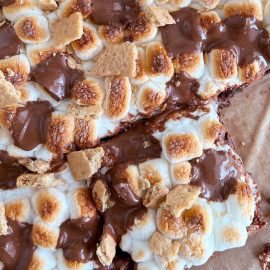 For stovetop version, melt chocolate and butter over medium low heat, stir in vanilla, and proceed with recipe. Use parchment paper to line the pan to make it easier to remove brownies for slicing. You can either bake the marshmallow topped brownies to melt them or broil for extra color and texture.

These delicious s'mores cookie bars combine the flavor of everyone's favorite campfire treat with a classic chewy brownie texture. I hope you enjoy these fudgy s'mores brownies as much as my family does!